The Mitchells vs. the Machines Wiki
Register
Don't have an account?
Sign In
Advertisement
in: A to Z, Characters, Males, M

Monchi is a small pug with dark peach fur and a brown muzzle and ears and he is cross-eyed. He has tiny little brown ears that perk out of his head and a little messy hairdo on the top of his head. His back is dark brown and he has a white underbelly. His whisker-holes are almost shaped like scales, and he has few whiskers. Whenever he is held, he has a large chub/neck chonk that puffs out.

Monchi is quite dumb for a dog and compared to the Poseys' dog, he is 'unfit'. He also gives up quite easily. However, whenever anyone is sad, you can count on Monchi to cheer them up!

Due to being a pug, Monchi acts as a robot shield because of the fact the Pal MAX robots go CRAY CRAY at the sight of this oblivious dog because none of the original PAL Max's sensors can determine if Monchi is a dog, a pig, or, for some reason unknown, a loaf of bread. It seems at the epilogue of the film, Eric and Deborahbot 5000 have gotten over glitching at the sight of him. 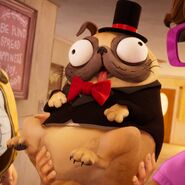 Monchi in a suit like a little gentleman
Community content is available under CC-BY-SA unless otherwise noted.
Advertisement